Contrary to popular belief, Disneyland and Disney World are not the same thing. For one, they are on opposite sides of the US. I grew up going to Disney World, so I am quite familiar with Flordia’s version of the “happiest place on earth”. I had never been to California’s Disneyland until me and Kennzie’s senior trip this year. They are mainly the same thing, but if you are familiar at all with Disney parks, you will find huge differences between the two. 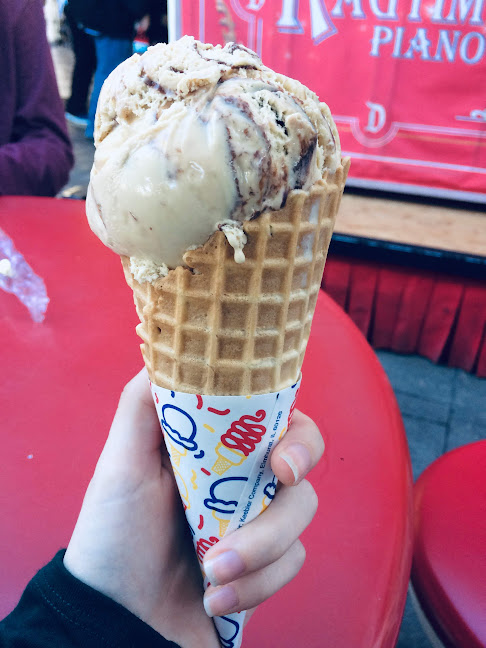 The type of tourists is another thing. Disney World is covered with people from all over the world and America. You hear so many different languages and see so many people of different cultures. At Disneyland, it is mainly people from the West Coast and people from Japan. Japan seems sorta random, but there were a lot there! Funny story: At Disney parks there are different types of mouse ears and hats to wear to sport your love of all things Disney. They have a very wide range of designs, with just about every Disney character. One of the choices are Mickey “Bride” and “Groom” hats for newlyweds. On our last day, there was a large group of about 50 Japanese students. They were walking past us at one point, and I noticed that 4 or 5 of the girls we wearing “Groom” hats. They, being foreign, had absolutely no idea how goofy they looked!😂 (no Disney pun intended😜)

There are a set of rides that aren’t at both parks, so it’s nice to visit both. Unlike Disney World, Disneyland sells hand-dipped corn dogs. Disneyland also has these amazing soft pretzels that are just perfect. I got a cream cheese one and a jalapeño cheddar one (different times). The cream cheese one tasted like a cheesecake stuffed pretzel- it was SO yummy! The pretzel itself was deliciously warm and flakey, and I am craving them on a regular basis now.😜 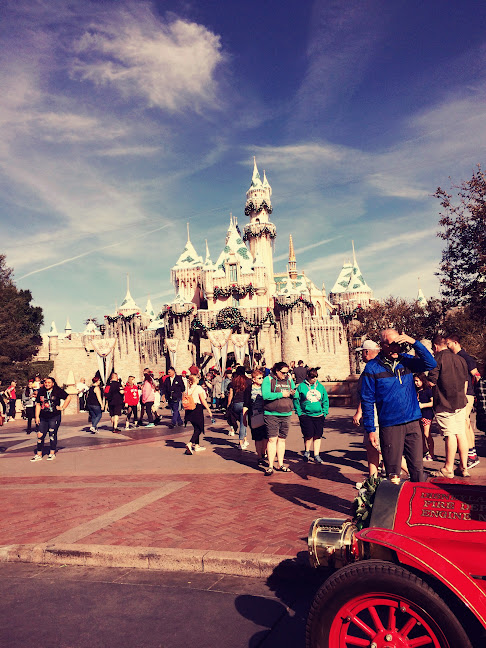 One of the other biggest things was the castle difference. Disneyland’s castle doesn’t really compare to Disney World’s, so we were slightly bummed our first day on Main Street. It is still pretty, just not nearly as good as Disney World’s.🤷🏼‍♀️ I think lines were a lot shorter at Disneyland, as well. The longest we waited was an hour, which is not that bad for Disney. Most rides were a 20-30 minute wait.

It’s a Small World is a classic Disney ride and has always been a family favorite. We didn’t know until we got there, but It’s a Small World is a HUGE deal at Disneyland. The ride itself was breathtaking, especially at night, and more impressive than the castle! There were tons of It’s a Small World souvenirs and many expensive purses and clothing items with that theme. This ride, along with The Haunted Mansion, was decked out for the holidays, which made us get really excited for Christmas! Disney World does not decorate these rides for the holidays, which is another plus to Disneyland.

As I said before, I really can’t decide which is my favorite, but I know I really, really loved Disneyland! I am anticipating our return!😃

2 thoughts on “Disneyland VS Disney World”

A Peek at the Author:

I'm a small-town girl who loves Jesus, ice cream, and sticky notes :) Some people call me Maddi, others call me Maddison. A few of my favorite things include reading good books, spending time with those I love, traveling, and drinking coffee. According to MBTI, I’m an INFJ. On the Enneagram, I am a Type One. I happen to be an extroverted introvert as well; this means I am an introvert who really enjoys getting to know people, among other things:) I am very passionate about what I believe in and absolutely love the Apostolic life I live. I am inspired by emotion-rich music, writings with depth and meaning, and people who give their lives for the furthering of God's Kingdom. Thank you for visiting my blog! I’d love to hear from you!